Update on the ADA

You are here: Home > Blog > Update on the ADA

There have been some confusing messages coming out recently regarding changes to the Americans with Disabilities Act (ADA). WebAIM readers may want additional information so they can provide comments and feedback on an issue that continues to be conspicuously absent from the ADA, namely the Internet.

Let me review what has happened in the past couple of weeks. On June 17th, the Department of Justice opened up a Notice of Proposed Rulemaking (NPRM) on Titles II and III of the five titles of the ADA. This regulatory process provides an important time for proponents of web accessibility to be heard. Then, just yesterday, the House passed the “ADA Amendments” Bill, a parallel bill that would negate the NPRM and regulatory process if the Senate passes it and the President signs it. It resets the ADA to previous language and essentially negates several Supreme Court rulings that have weakened the ADA over the years. So, we now essentially have 2 simultaneous efforts on the ADA. Which one is going to win? Who knows? Will the web become a part of whichever version of ADA wins? Not unless we engage in some advocacy work.

So if you believe the web should be included in the ADA, what should you do? We are recommending a two-tiered approach to action. The first is to provide comment and feedback into the regulatory process of the NPRM. The second is to educate your senators about the importance of web accessibility.

Here is some context on each of the two tracks that you may find useful:

Feedback into the proposed rules

You can submit your comments on the proposed changes to the ADA until August 18th. These comments can be submitted online. It is important that you remember what Titles II and III of the ADA cover so that your comments can deal with this content specifically. Here is a quick review for those that need it.

Again, comments on these two titles are open for public comment until August 18th. The NPRM itself is voluminous at over 1,000 pages of content. I poured over the materials hoping to see some clarification or attention to web accessibility, but was disappointed to find none.

Certainly we can’t fault the 1990 law (that was created in the mid 80’s) with failing to mention a technology that was just grabbing hold of the world. However, now is the time to clarify the original intent of Congress by including this ubiquitous technology into this definitive law.

Speaking of Congress, many of us are aware of the 1996 letter by Senator Harkin to the Department of Justice that asked if the Internet was, in fact, covered by the ADA. The DOJ response at the time indicated that covered entities must provide effective communication regarding their programs, goods, and services through accessible means. Huh? The response was sufficiently vague and I believe this has contributed to a lack of understanding about who needs accessible web content and when they need it (e.g., “I’ll fix the site if I get a complaint. Yeah, that’s a ‘reasonable accommodation’ allowed under the law.”). Since that time we have had many court cases that have started defining who is covered, under what circumstance, and even if the Internet is a “place”. I believe that new regulations should address this explicitly.

The proposed ADA Standards for Accessible Design continues its focus on the built environment. The Internet appeared in only two contexts that I could locate. First, it appeared in an advisory message in Section 707 (Automatic teller and fare machines). Second, there were several references to Internet for video interpreting services (i.e., the need for VIS to be on a dedicated high-speed Internet) throughout the document. If anyone finds other substantive references to the web, please post it here.

Absent in the proposed ADA standards is clarification or mention of the Internet in ways helpful to many of us. It could have been easily covered in many places (e.g., in clarifying the provisions of effective communication or in clarifying the Internet to be a place of public accommodation). But for whatever reason it is not there. I hope that many, many voices will be heard through the NPRM process on the need for this new regulation to clarify the importance of accessible web content in titles II and III.

Education on the ADA Amendments

We don’t know if the Senate will look at the Bill this year or next, but they will have to at some point since it passes to them from the House. This provides us all an opportunity to visit with our senators and share our views on the importance of including the web in any ADA amendment. If you talk with your senator, you will want to know that the ADA amendments passed by the House have a focus on Title I (i.e., employment) and on definitions (e.g., who is a person with a disability). Tailoring information in that vein is easy and will help them understand what you are saying in context of the Bill. Certainly the web is vital in today’s employment settings. Also, this affects a person’s ability to secure work or to be considered for some promotions (e.g., online licensure exams, management training courses). An education process with your Senator could go a long way in helping them understand the very real consequences if we fail to make the web accessible for millions of Americans with disabilities.

On a related note, if this Bill were to pass and the President were to sign, new regulations would follow, as would a new NPRM process. However, if you provide comments under the current NPRM, your voice might be heard now. My understanding is that comments made under another rule should be considered relevant, especially since they would relate to the same statute. Thus, it is possible that your advocacy efforts now many have effects on this potential future Bill.

Now is the time for us to get this right. We must ask that web content become part of what is covered under the ADA. And, we are not the only ones who think this:

Please make a commitment to be an advocate on this important issue. 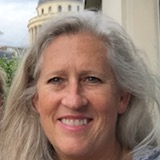